In my childhood and for centuries preceding that, men missed out on one of what many men cite as the highlight of their entire lives, witnessing the birth of their children. Watching it on TV is one thing, seeing the birth of your own baby, right there in front of you is to actively witness your part in one of life’s miracles. Nowadays, this is commonplace, a cultural shift eventually evolved, allowing men to consider, then act upon, this freedom. It’s not so long either since men wouldn’t dare to be seen pushing a pram, bathing a baby, wearing long hair, the colour pink or purple or any ornament, however tiny, in an ear! Indeed, I remember working in The City of London, in those banks and insurance houses of The Square Mile, when a rare man brave enough to wear an earring or ponytail with his suit was ridiculed by his peers. What seemed ridiculous to me then, seems ridiculous to most now. Those activities, which range from the profound to the seemingly superficial were denied to men through a self imposed fear of ridicule. Yet, in the Restoration period in Western Europe men wore high heels, long curls, bows, flounces, lace, velvets and brocades in vivid colours without being considered effeminate in any way. Now, a shift has taken place, and in some respects men are freer to express themselves.

I’m guessing a lot of men now are glad to be freer and more creative in how they live their lives. Yet, there’s still a long way to go before they have the courage to explore who they truly are, to move beyond the “big boys don’t cry” scenario; to bravely expand into the fullness of their humanity. 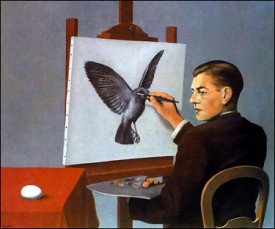 Renee Magritte with bird and egg

The great psychological pioneer Carl Jung cited the balance required for a fully expressive and mature human being to consist of a developed anima and animus. Each woman has her animus (her male component) and each man his anima or feminine tendencies. When a woman hasn’t developed her internal male characteristics she looks outside herself for these, often partnering up with an excessively macho man to fulfill her undeveloped male aspect, likewise for a man, he looks for a stereotypical female “Jessica Rabbit” type to provide what he lacks. So, a woman might choose a dominant male type to do everything for her, and a man may choose a needy, subservient or emotionally over expressive woman to mirror his unexpressed emotional needs, while allowing him to feel like the great provider. These imbalanced relationships, which run along a spectrum from more to less extreme, are fairly toxic and don’t succeed, they tend to be fractious and unsatisfactory. Each one comes to deplore the traits that previously seemed so alluring, not recognizing those very traits to have been attractive in the first place because they are the unmet, internal aspects of the self. Relationships that tend to flourish are those in which the partners, each developed in their own right, stand side by side and collaborate effectively as fully functioning individuals.

I’ve been exploring attitudes to business recently from the perspective of “hard” and “soft” skills. Hard skills are considered to be masculine: rational, systems, and results driven and are generally deemed to be more effective within the business milieu. Soft skills such as emotional intelligence, self-awareness, listening, empathy and creativity, are viewed as somehow wussy in nature, and not really necessary in a business context. Yet, it has been well known for millennia, from the Western Tradition of the gods, who were attributed certain contrasting traits, each deemed imperative for the functioning of humankind, to the Eastern recognition of Yin/Yang, the harmony of contrasts, that an integration of opposites is necessary for happiness and progress in every sphere. As a bird cannot fly on one wing so a business cannot make forward progress without recognising, nurturing and integrating the natural tendencies and learned skills of its staff. Enterprises, large and small, need to ensure the wellbeing of their staff and not just on physical levels or through programmes designed to foster left brain cognition while completely ignoring the rest of the person.

So much corporate training nowadays either focuses on an audience that sits quietly listening to a presenter who outlines systems while showing graphs, or alternatively, offers high energy Rah! Rah! Rah! competitive type interactive workshops in an attempt to creatively deal with problems, while inducing staff to engage with change, become more innovative and effective, or to foster better team relationships.

An advert for a well known corporate coaching business recently promised “no fluffy stuff’ in a byline and I immediately thought, here we go again, the modern version of the stay-out-of-the-labour-ward, don’t wear a pink shirt, feelings-are for-sissies-mentality. We need to move forward into deeper territory now, too many workshops and coaching programmes are there to seemingly cater to the needs of staff while treading safely on old routes and so not actually effecting profound change at any level and not allowing real, lasting and positive creative growth for either individuals, or the development of entrepreneurial attitudes and sustainable economic progress as a whole.

“I would say the surest measure of a man’s or woman’s maturity is the harmony, style, joy and dignity he creates in his marriage, and the pleasure and inspiration he provides for his spouse.” – Benjamin Spock.

Carl Jung was an avid student of the ancient alchemists who recognized the Hieros gamos as being the internal psychic sacred marriage; the ultimate in human maturity and development. There are various stories world wide on this theme, some of them seeming to represent coupling between humans and gods, or men and women, but symbolically they represent the balancing of the anima and animus as necessary for full functional development; for the birth of the complete human and, in the modern, business context for a fully functional organization which taps into the creative, holistic capacity of its individual members in order to facilitate and flesh out the dynamic progress of the whole. Often, this needs to take place in slower paced, reflective and creative programmes, where the emphasis on problem solving is removed and insights are allowed to emerge when stress to perform is removed, rather than being forced through a structured programme of tight strategic exercises.

Fear is excitement without the breath. ~ Fritz Perls

Creativity becomes unblocked and enthusiasm and capability resurface when participants are allowed to slow down, breathe, expand and truly re-engage with and enjoy themselves.

“But life at its best is a creative synthesis of opposites in fruitful harmony.” ~ Martin Luther King Jr.

When women and men are allowed and encouraged to be fully themselves at home and at work, each can give birth to something new, unique and ultimately rewarding for everyone. 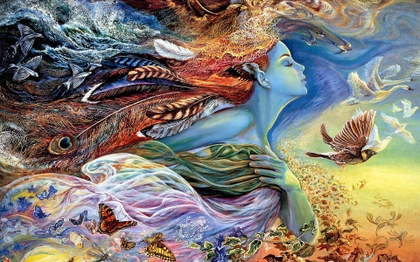