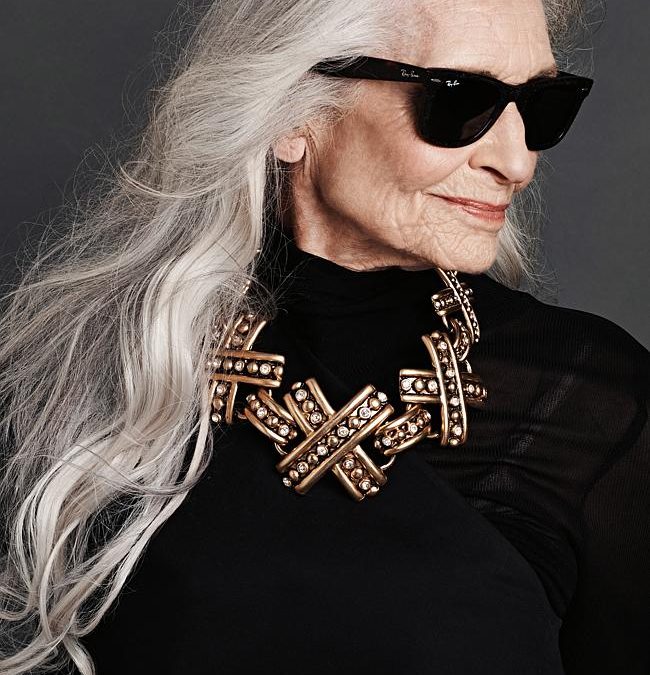 WHAT THE MEDIA WOULD HAVE US BELIEVE

Now, what ingenious Mediaeval spin doctor thought that one up? Yes, the unequal categorization of women vs men started waaaaay back, before Mediaeval times, however, that’s far back enough to start, for now…..even though, at some stage, we’ll touch upon the whole Adam and Eve thing.

Soooooo, did you know, that, in mediaeval times, women were thought to be the unclean, undeveloped, less powerful aspect of humanity. Yes, indeedy, the ignorance of the time, suggested that our organs had never developed to the stage of outer manifestation – that’s why instead of testes (balls ladies, balls!) we had interior ovaries, and, our vagina was thought to be an inverted penis, an organ that had never matured. Menstrual blood was considered to be unclean fluid, and therefore, so were the women it issued from. It never dawned on anyone, it seems, that all of this was due to God’s divine intelligent creation. (We might say, today, the universal intelligence that creates male and female anatomy for essential purposes of procreation), I mention God, because they were very much into God – all was God or the Devil, Heaven or Hell. Women were pretty much earmarked for the latter…those undeveloped, vile temptresses condemned by God (it said so in the Bible) to suffer terrible pain/death at childbirth for their wily ways of tempting men to have sex. (The no-sex-no-babies-no-human-race notion never seemed to gain traction!).

A BIG lack of dot joining going on there….

If you’re attempting to join the dots between Mediaeval heaven n’ hell-ing and grey hair today, well, let’s just say those illogical perspectives haven’t changed that much, all that craziness has just become more subtle, less obvious. The Mediaeval mind seems so ignorant to us, yet our own contemporary society insidiously conditions us to unquestioningly accept certain assumptions, and to unconsciously create self-images that belie the truth of our own direct perceptions. Women are creative, intelligent, powerful and sexy at all ages. We don’t start stupid and get stupid-er as times goes by, we start smart and stay smart, becoming wiser as time progresses. As we become more powerful, our media works to create the impression of less power by creating images of older women as less-than…when we appear at all, that is. To quote an Irish Times article - Grey Pride: “Grey haired men are seen as dishy, grey haired women as dishwater.” So, what’s happening here and how does it affect us?

Society would like us to believe, it seems, that we women have lost our falorum, our diddle-die-orum da and not men, as the song states!

A headline from Harper’s Bazaar on Hollywood’s Over 40 something males:

THE HOTTEST SILVER FOXES OF HOLLYWOOD

Like a fine wine, some heart-throbs are just better with age

This is followed by 24 photographs of (the usual suspects!) Hollywood male actors ranging in age from 36 years to the mid-70s. These men are regularly romantically paired with women decades younger than them in movies. They are celebrated as handsome and desirable by women of any age and exude confidence in the photographs accompanying the article. They know they’re handsome and considered to be virile and sexy – it’s been sanctioned by society. They effortlessly accept the silver crown bestowed upon them.

When, I ask you, do we see headlines like this, celebrating older women? Any headline in mainstream media that purports to celebrate older women usually has the word Cougar attached to it – she stalks younger men (The Graduate)! Is somehow shameful….should be quiet and sexless and stick to minding children/grandchildren or engaging in some domestic heavenly task!

If she’s powerful in the boardroom, she’s a “boardroom panther” – not simply a naturally powerful, capable businesswoman. Imagine a male CEO being thus labeled with impunity.

Or, if she's considered beautiful and sexy over 40, she's presented as some anomaly of nature.

You won’t need many fingers to count the number of times you’ll see an older actress romantically paired with a younger male co-star. If she appears in a film at all – it will usually be in a minor role, very rarely as the star carrying the film and even rarer in a hot romance with a young actor. The statistics for this occurring is in a mere 10% of films, and then, the age difference between her and her male romantic lead will be less than ten years.

The quotation below[1] expresses the frustration of women in the film industry: 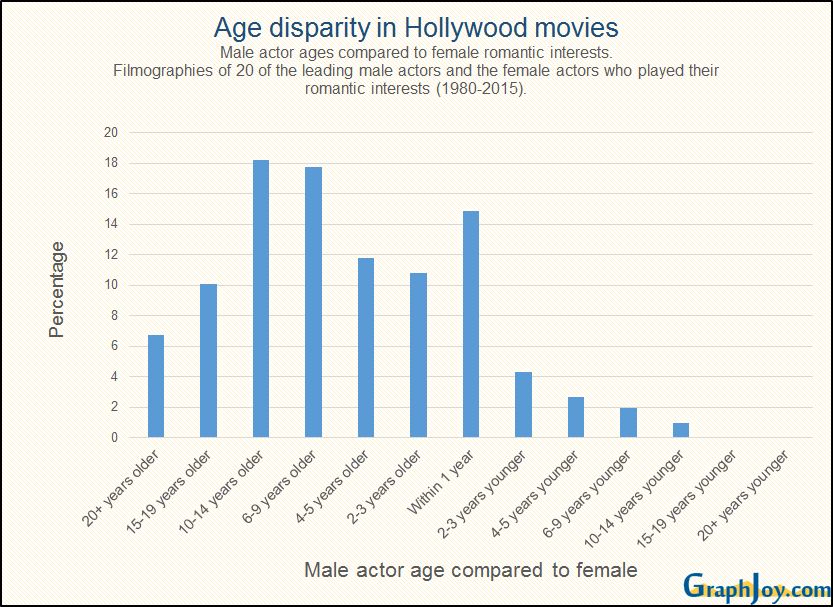 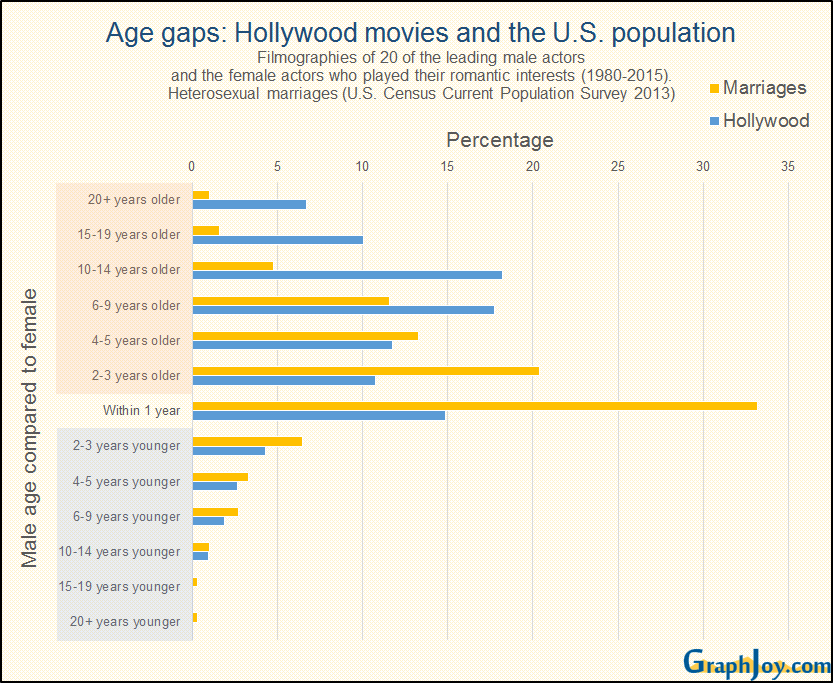 “Helen Mirren recently made headlines after she called Hollywood out on its "f***ing outrageous ageism" in an interview. But as well as ageism being a problem in itself, Mirren brought up another facet to the Hollywood ageism debate - the gender divide. She said: "Honestly, it's so annoying. As James Bond got more and more geriatric, his girlfriends got younger and younger."

While this criticism doesn't apply to the upcoming James Bond film, Spectre- which stars a 50-year-old Monica Bellucci alongside a slightly younger Daniel Craig[2] - it does for the films predecessors, namely A View To Kill where Roger Moore, 57 at the time, was cast alongside a 28-year-old Fiona Fullerton.

But Roger Moore's witty Bond isn't the only culprit here. An analysis of over 400 blockbuster films found that when male stars reach their 50s, they are still paired with female co-stars who are, often, still in their 20s…..

Until the age of 35, the average age difference between Tom Cruise and his co-stars was 1.25 years. After this, the age difference increased by over 900 per cent to 12.55 years. Most recently, in Edge of Tomorrow Cruise, aged 51, starred alongside a 31-year-old Emily Blunt……

The study concluded that the "mysterious age of 35 years old" is where casting patterns begin to change drastically. Until this age, actors would be paired up on-screen with similarly aged actresses, but after this the male actors would star alongside significantly younger actresses.

As the second graph above shows, this male fantasy is not representative of male/female pairings in the 'real world'.  Nevertheless, the disparity persists and affects the general perception of women as we get older, and worse, can affect our perception of ourselves. 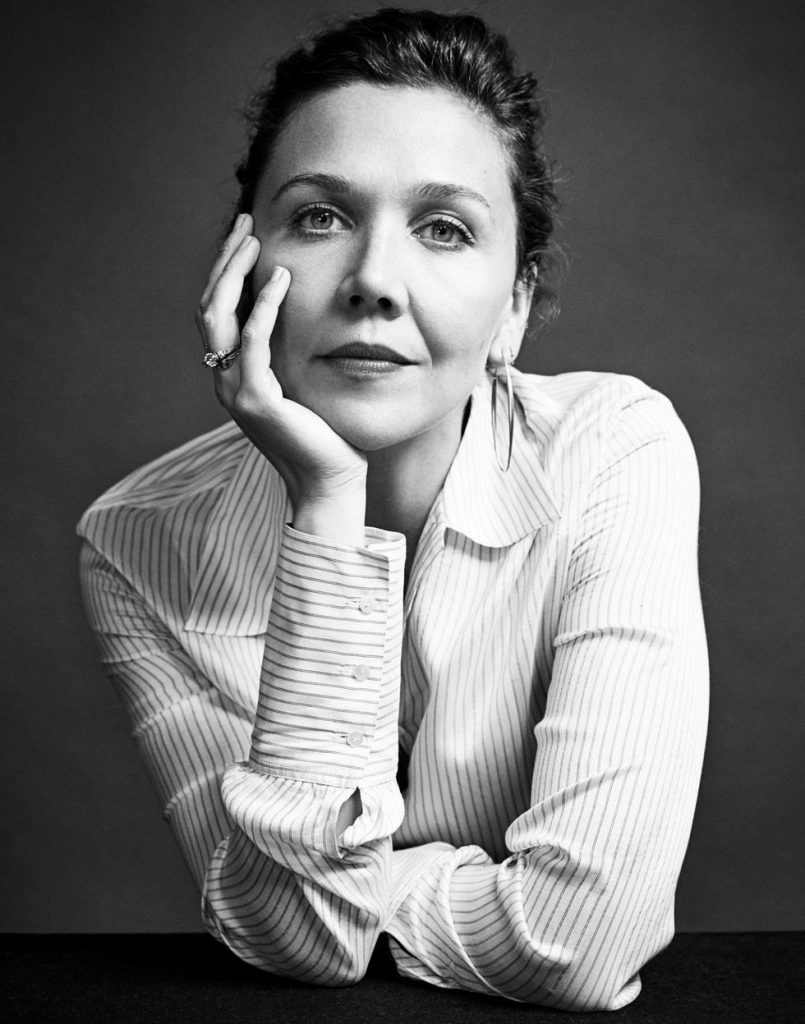 While we can quip about the imbecility of the ruse, we need at the same time to take it seriously. The walls of mediaeval churches bore illustrations depicting heaven and hell and the sorts of transgressions that would send you straight to the latter. These were intended to keep the congregation in check. Modern times see us similarly chastened to keep in our place – we are bombarded by images from all quarters, that serve to reinforce the status quo. Images that, through being absolutely everywhere we look, bypass our ability to consciously defend against the messages they send to our subliminal consciousness. It takes a conscious effort to realise:

Here, in a recent newspaper photograph, Helen Mirren again seeks to overcome illusion – this time, that female celebrities don’t a) age and b) should ‘act’ a certain way or dampen down self expression or self determination when they get older (#olderwomenarefeisty). [3]: 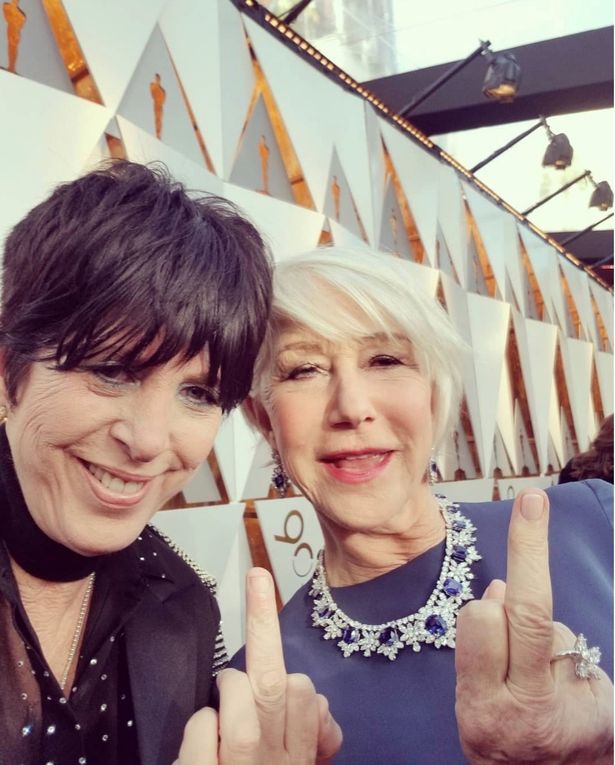 “Not long ago, Maggie Gyllenhaal's five-year-old daughter Gloria asked her what a witch was. It was right after the US election in late 2016. She considered her answer carefully. 'I said, "A witch is a powerful woman that nobody can handle. And they had to marginalise them because of that." I'm trying to make my husband laugh, but on the other hand I think that's true,' she says jokingly. The Brooklyn-based actor, 40, also applies this kind of knowing cynicism to her professional life. She is in the business of female representation, not only as a mother and activist, but as an actor and now producer, too.”

Her next film, a thriller called The Kindergarten Teacher, is a project developed almost entirely by women, with Maggie acting in almost every scene, as well as in the producer role. 'It wasn't an exercise in women making movies together, it just happened that we were a group of women,' she tells me over the inevitable kale salad[4] in Manhattan's ABC Kitchen. 'Our sensibility was feminine, so what we were going to make when we put it all together was going to be different than if it were made by a group of men. I'm curious to see what that's going to look like.'”[5]

[4] Women who value their worth look after themselves!!!